A visit to Tucson: A Gold-level Bicycle Friendly Community

Get up early in Tucson in late May to enjoy the cool temperatures (70s) and Tucson's Rillito River Shared-Use Path!  Early rides provide great, long, morning shadows! About a 20 minute bike ride from the University of Arizona, this urban bikeway runs along both sides of the river on the north side of town. The trail goes under each major road crossing providing miles and miles a stress-free riding. 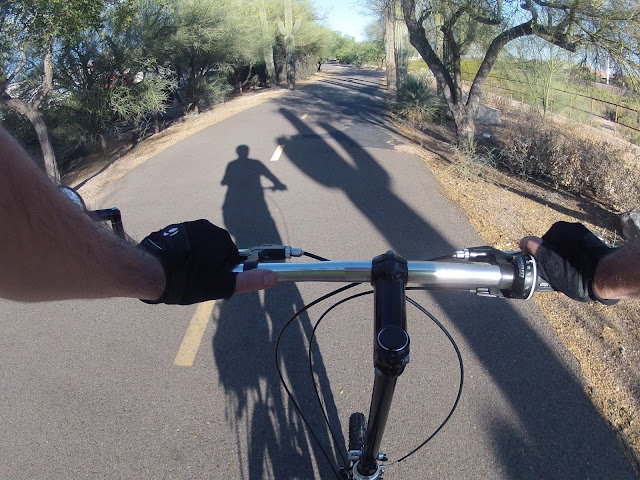 The ride between the Rillito path to the University is nice.  Mountain Ave has a buffered bike lane most of the way: 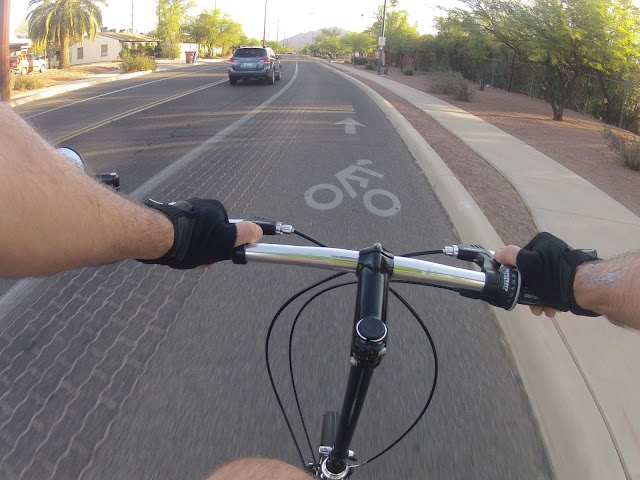 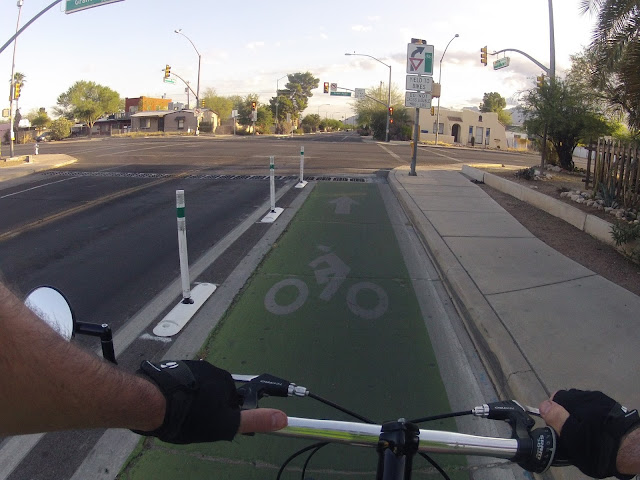 ... and a button for cyclists to call for a green light:

As you approach the University, underpasses provide access to the main campus without crossing major street the borders campus and paths continue into campus to bike parking. 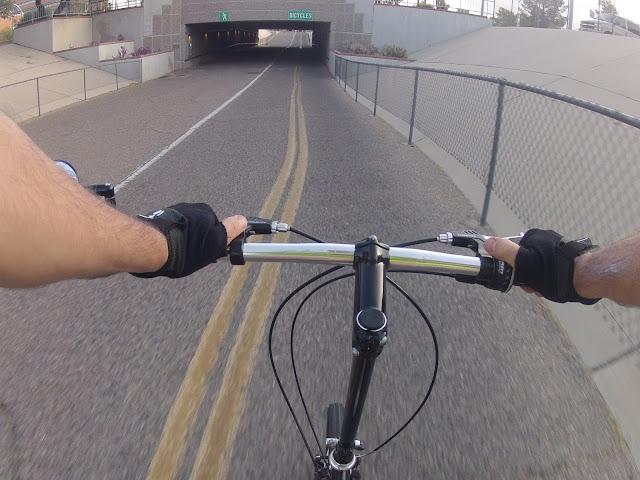 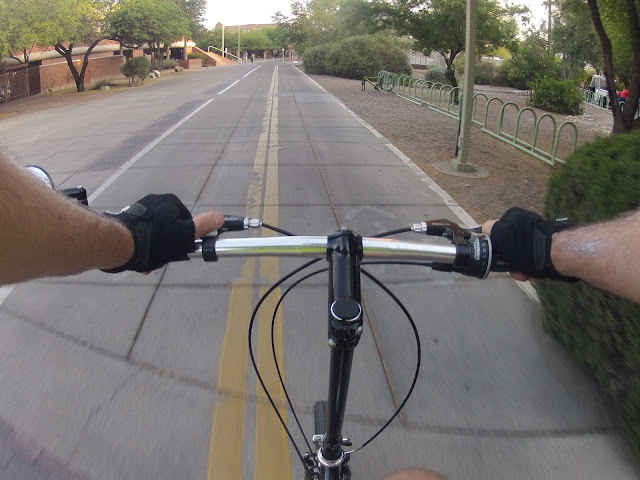 Other bike routes are easily identified on Tucson's Bikeway map which conveniently folds to size of a business card: purple for off-road paths, green for on-road bikeways: 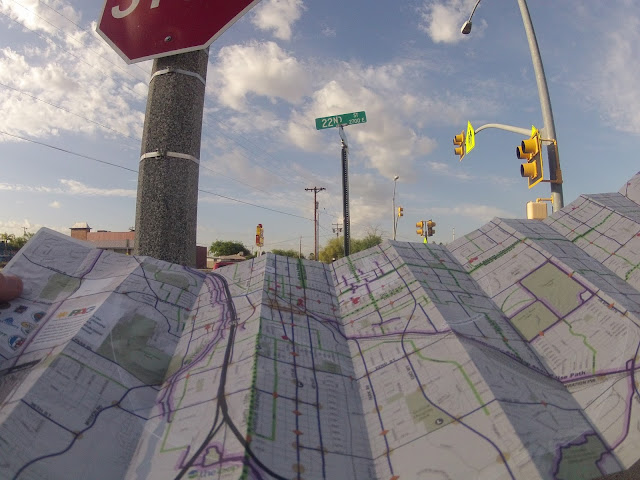 Apart from the wonderful shared-use paths and buffered bike lanes, Tucson offers bicycle boulevards along low-traffic streets.   Here sharrows, rather than bike lanes dominate, here's 3rd Street, a route I used to ride nearly everyday when I lived to Tucson 10 years ago. 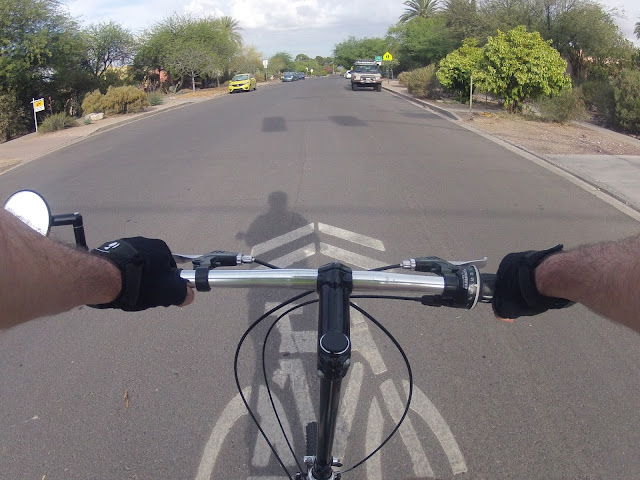 On the 3rd Street Bicycle Boulevard, cars may not turn on to 3rd Street from busy roads.  Note the DO NOT ENTER: BICYCLES EXEMPT sign and the sharrow leading the way: 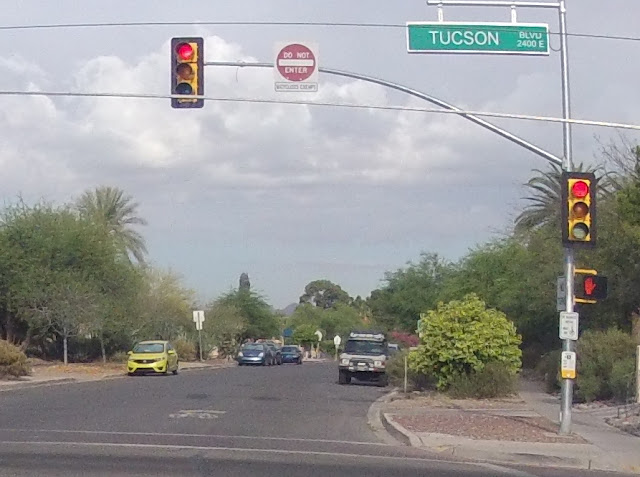 Bike routes are also marked by signs where the bike routes intersect: 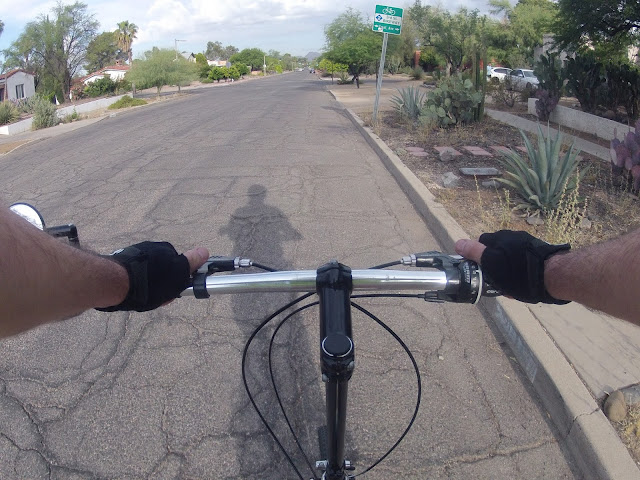 One some routes, cyclists are channeled to use the cross walk to cross major roads: 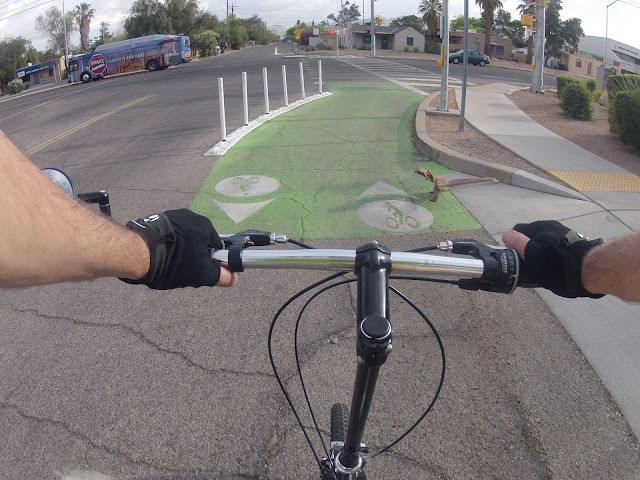 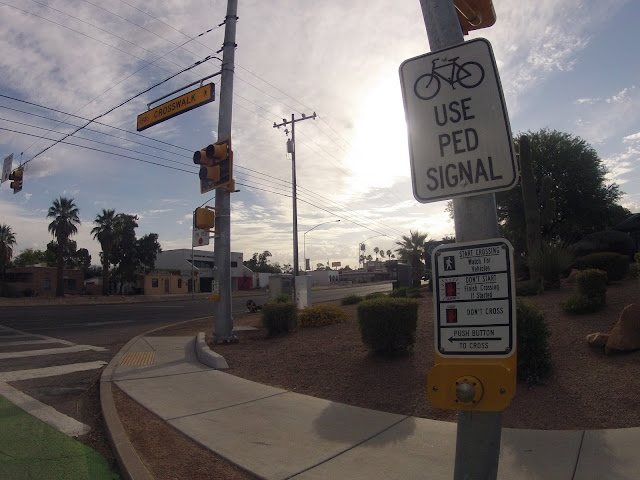 At these here the ped and bike crossing run parallel and people on bikes get their own signal: 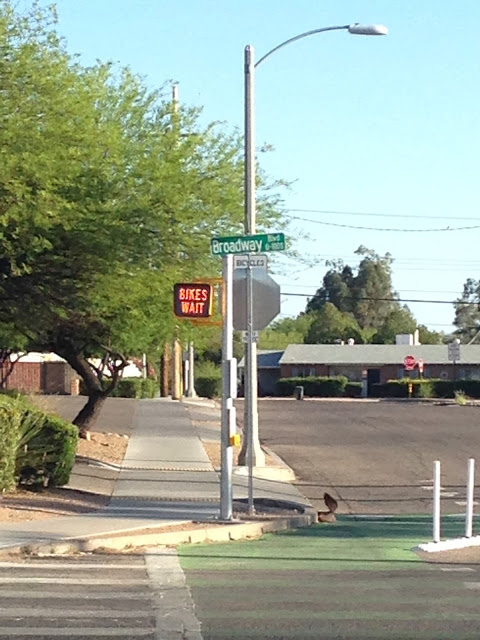 Note this crossing is a mid-block crossing for bike/ped, there is no crossing light for car traffic: 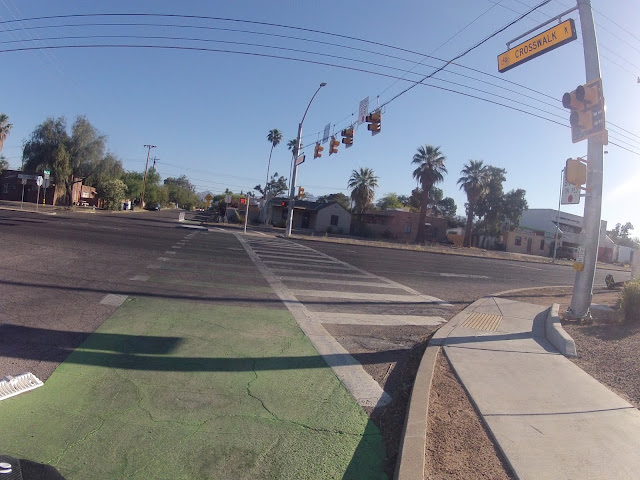 These routes provide regular sharrows with both a directions and a "share the road" message: 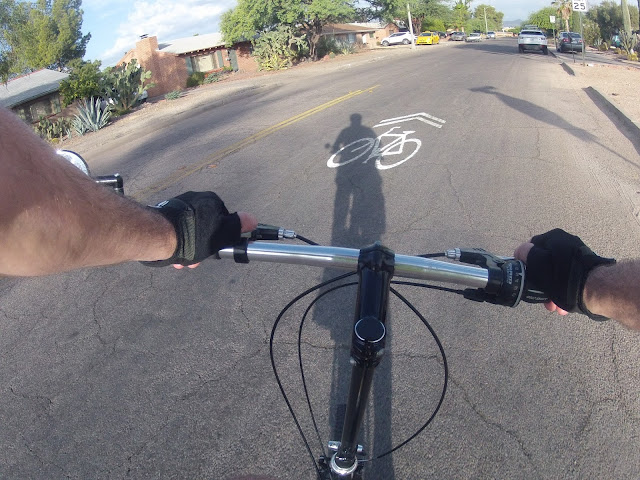 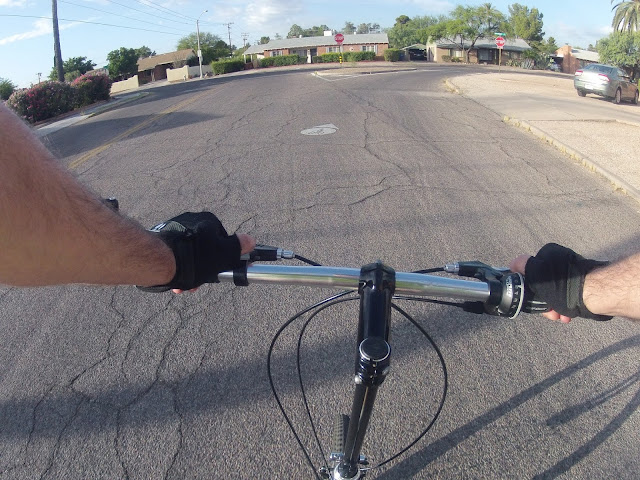 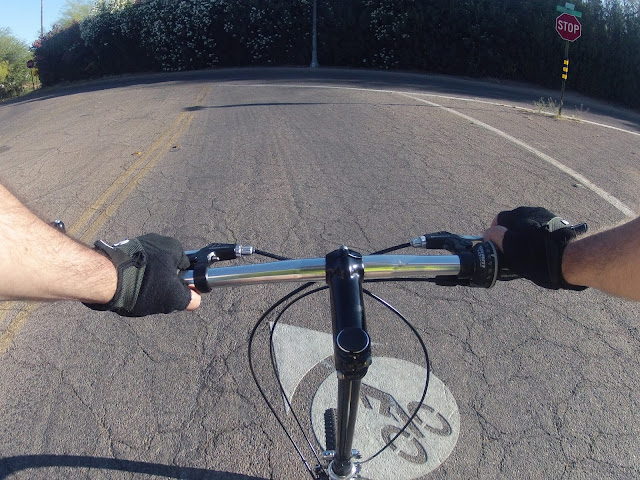 On major roads with regular bike lanes, wrong way signs on the road tell cyclists to bike in the direction of traffic: 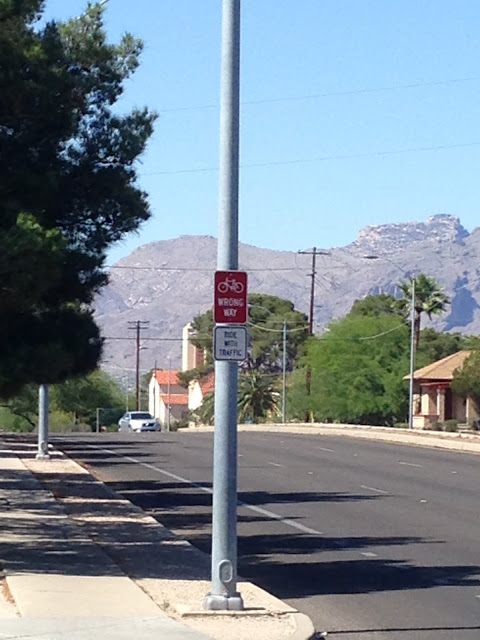 So many great ideas here for other cities to steal.  Let's further prioritize bicycle travel!  We may not be Amsterdam, but can we at least be Tucson?

Local Connections:
Shared-use paths you can bike to:  The East Coast Greenway is coming along, just got a big boost as part of the St. John's River to Sea Loop will get $25 million in coming years.  The segment under the International Speedway Blvd/US 92 bridge opens July 14th at 5:30pm! 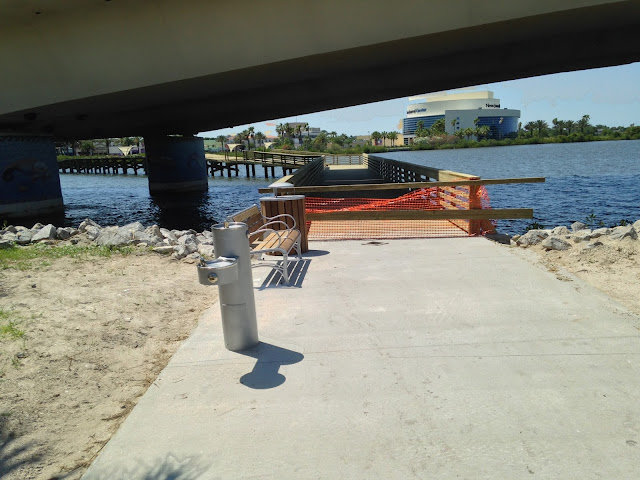 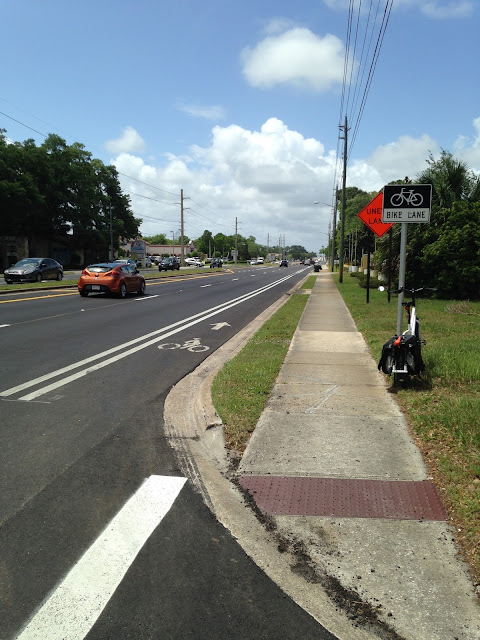 Other major arterial roads are behind: ISB, Nova, Clyde Morris, Williamson all have sections that are busy, very fast, and lack all infrastructure (except lanes for cars): no sidewalks, no shoulders, no bike lanes, etc. Safe travel on busy roads is important because few parallel routes provide connectivity due to closed-off neighborhoods and waterways.   We need to think about how to build
a low-stress highly connected network for bikeways.   I believe we first need a stress map, then we can start planning: 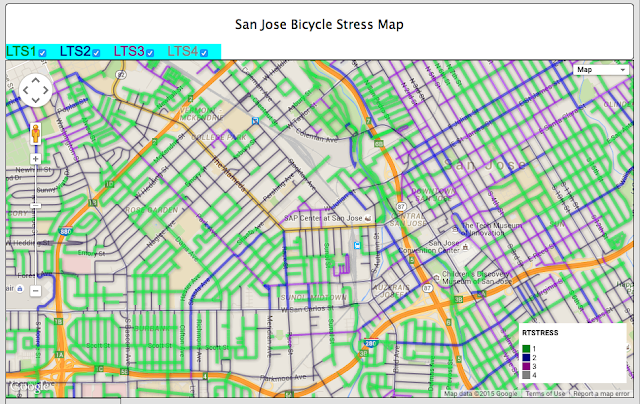 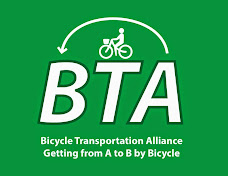